First impressions: wow this lens is heavy! Compared to the 18 and 35 mm primes which I have, this zoom is considerably heavier. For such a lightweight camera as the X-Pro 1, the front heavy load is noticeable. I guess it's only worse on the even lighter XE-1.

The first time I used it I thought it was not working, so silent it was! When you focus, you can barely hear a sound; this is really great. And the focus... Wow, this is amazing! It's much faster than the primes and did I mention silent? ;-) I guess this has to do with an internal motor, while heavy, really works wonders. As always in photography (and life), it's all a question of compromises.

I'm not going to comment on sharpness, but for me the quality was more than enough. I shoot only JPG as they are just so good with the Fuji. I found the bokeh to be nice and creamy too. From a technical perspective, I found the lens excellent.

I didn't have much use for the optical image stabilizer. With such good performance at high ISO speeds, I don't really see the need for stabilization. On top of that, it's mostly my subjects that move, not my camera that shakes. I wonder if that stabilizer added a lot of weight to the lens? If so, I'd much prefer a lighter zoom without stabilization.

I also concur with some other reviews that were disappointed that aperture was not available directly on the lens. The aperture ring clicks but doesn't indicate any values. I understand that's due to the variable aperture of the lens (2.8 at 18mm vs 4.0 at 55mm). For that reason you always have to check the aperture in your viewfinder. But I really liked the fact that when you set it to 2.8 @18mm then zoomed to 55mm, the lens switched to 4.0, and when going back to 18mm, it switched back to 2.8 automatically. I didn't expect anything different in fact.

So is this a good lens? Absolutely! Apart from the slight overweight, I really liked it. If I didn't already own the 18 and 35 lenses, I'd definitively get this zoom. For now I guess I'll just keep zooming with my feet... A good example of the background blur you can achieve. This picture was taken at 55mm f/4.0 with a slight angle down the orange juice brick. Look how it slowly goes out of focus and the background bokeh. Very pleasing in my opinion! 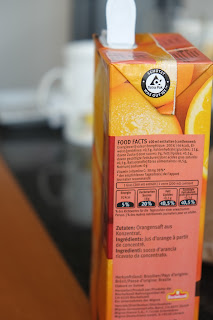