After my last post describing how to open the Nikon lens from the back to clean the mechanical parts, I wanted to also clean the optics. There was some dust stuck inside the lens and my goal was to get it out.

The major problem I had was that I didn't have the proper tools to open the lens from the front. In particular, you need a friction disk to remove a ring in order to reach the front lens element. I had seen some people use double sided tape and use the back lens cover to unscrew the ring. But the most clever tip came from Michael Freeman, a canadian lens repairer who helped me out a lot (thanks Michael!). He suggested using a 1-3/4 inch (45mm) rubber sink stopper. 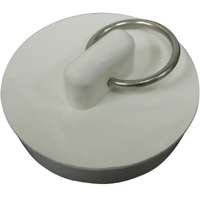 I went down to my local hardware hoping to find that. But they only had smaller diameters. I had to improvise another solution from what I could find there: using a big washer that I would cut to the right size. Then I needed to use a correctly sized glass that I could invert and apply pressure on the washer which in turn would make the ring turn (don‘t forget "Right You Tight it, Left You Loose it").

Here are my improvised tools (click on images for bigger versions): 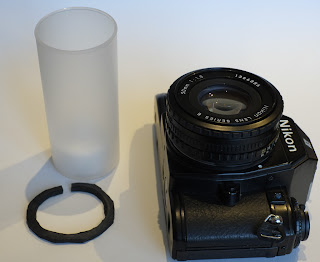 Once I got that front ring off (which is threaded), it was just a matter of getting the 6 screws off and pulling the front elements out of the lens. You can then see the aperture blades underneath. I didn't go further; only blew some air in there to get the dust off. The front 2 elements also had dust stuck in between them, so I had to get them separated. There was a slight point of glue on the second element which I removed with some acetone (nail polish). Then you can unscrew the 2 elements and clean them. Reassemble exactly the same way backwards. 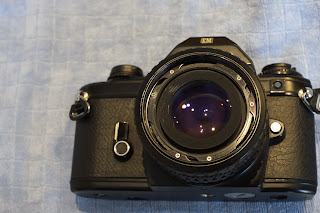 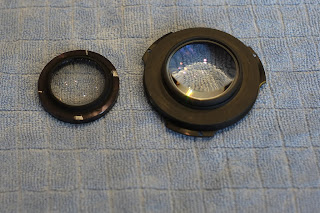 A schematic of the optics: 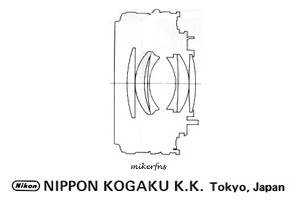 Cleaning the optical elements is easy once you have the right tool to open that ring! I hope these instructions can be helpful to somebody.

And just to show how great this little pancake lens is, check out a some pictures. When you nail the focus, sharpness is excellent for portraiture, as you don't need to have a needle sharp lens for portraits. These shots were taken at f/1.8. If you don't mind manual focus, then this lens is really worth it!

Pictures straight out of the Fuji X-Pro1 camera, shot in JPG. Look at that bokeh! 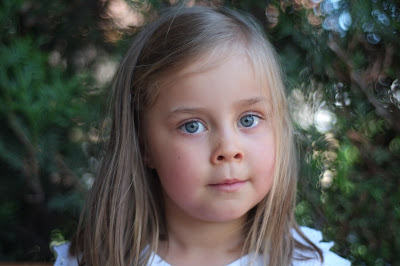 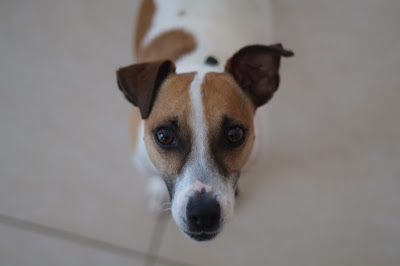 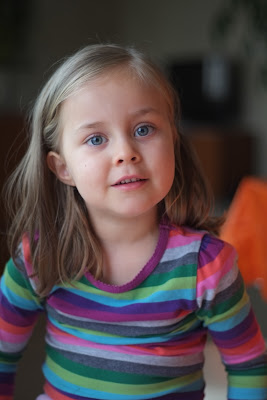 How to dismantle the Nikon Series E 50mm

Sometimes retro stuff just comes back in favor. I recently bought a Fujifilm X-Pro1 camera, which I absolutely love! I'll write up a blog post about that camera soon. But for now, I wanted to talk about the Nikon EM camera with the Series E 50mm 1.8 lens. One of the reasons I bought the Fuji X-Pro1, was to use legacy lenses. The beauty of the Fuji X-Pro1 is that you can buy adapters for almost any lens mount ever made. I totally discovered some of these old lenses. The main point is that they must be able to set the aperture on the lens. All old Nikon AI lenses did that. So did the Nikon Series E lenses, which is pictured below on the Nikon EM film camera. 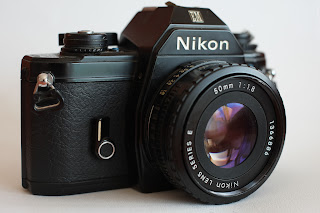 I actually bought that Nikon EM camera with the lens from a nice chap here in Geneva. Saw his advertisement for it on anibis.ch (a free for sale website). His dad was getting rid of about 60 old cameras! Maybe he was moving to digital? Anyway, the camera is not very useful to me, I'm not going back to shooting film! If anyone wants it, let me know. But the lens is the goodie.
This lens was probably manufactured in the first half of the 1980's. That's pretty old for a lens; but it still works great. In fact, the optics are a bit soft I would say, maybe it's due to the dust inside. I'll have to consider getting it out, when I get the appropriate tools. For now, I've just taken it apart to completely dismantle the mechanical parts.
To dismantle the Series E 50mm 1:1.8 lens, I went from the back. You need to remove the 3 screws on the lens mount. 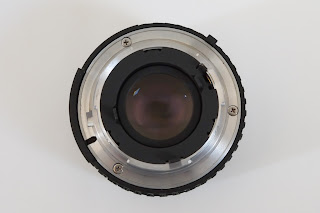 The back side of the lens, still closed with the 3 screws. 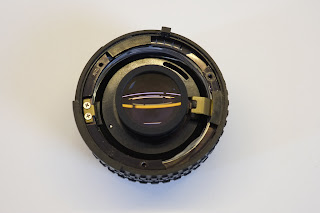 Afterwards, you can remove the aperture ring. Just be sure to note how it was put in place, as you'll need to remember that we you mount it back at the end! 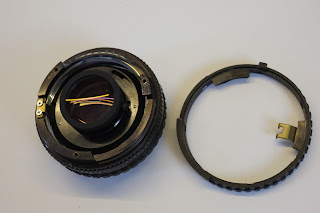 Finally you can unscrew the optics with the large inner helicoid. The lenses are actually all in one block. If you need to go in there, you need to open the lens from the front, which is a whole other story. Some people have documented how to do that. See for example James T's blog post: http://www.james-t.com/2011/07/nikon-50mm-f1-8-series-e-cleaning-the-front-elements/
For the really brave, you can also unscrew the 3 screws on the focus ring. Then you can reach the inner helicoid which has much thinner threads. Normally this is not needed, as the dirt doesn't get in there very easily. Be extra careful if you open this, as when you will mount it back, the screws have to align at the right place for the focus ring distance scale to be correct again.
I cleaned the old grease, and added back some brand new one that I found at the local hardware store. The original one was white, but the one I found was more yellow/brown. It was described as "universal lubricant grease" and came in a huge 250gr tube. I needed only a tiny bit, so if you need some, I've got tons leftover!
To remount the lens, just take all the steps backwards and you should be fine. It's actually much easier than it sounds. I'm no great mechanic, so if I could do it, with a little patience and observation, you should be able to do it too.
Next goal: clean out the dust, by going into the optics through the front of the lens.
Posted by Daniel Pfund at Friday, May 25, 2012 2 comments: