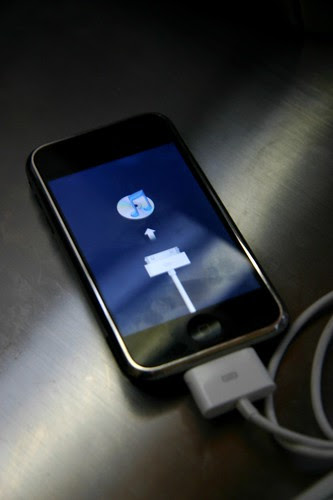 So here's a quick iPhone story, to change from just pictures...


This week I found a cheap iPhone 3G(8gb) on www.anibis.ch being sold by a local user in Geneva for only 150 CHF. After some back and forth emails, he tells me that he has asked his operator (Orange CH) to officially unlock his iPhone (which is done legally for free after 24 months contract in Switzerland) and when he did a restore in iTunes he got an error message, saying his iPhone was stuck in DFU mode. We agreed to meet at the train station and after a quick inspection, I indeed saw that it was stuck on the "connect to iTunes" screen. I thought it was in fairly good physical condition, so I agreed to buy it and hoped to be able to restore it later.


After getting home with it, I tried a simple iTunes restore to the final iOS release version available for the 3G: 4.2.1. That didn't work, I got an error 1015 at the end. After a quick googling, I tried the various answers found on "error 1015 loop": RecBoot, TinyUmbrella, iReb (PC only), iRecovery... you name it!


Finally I read the iPhone Wiki and found reference to this error. It seems that my baseband was too high versus the latest firmware... which was strange I thought. Upon reading more, it seems that the previous user obviously "forgot" to tell me that he had jailbroken and unlocked his iPhone before asking for the official unlock. For that, he needed to upgrade the baseband to 06.15.00, which is the iPad baseband of iOS 3.2.x. Normally, iOS 4.2.1 has baseband 05.15.04 for the iPhone 3G. The only way to restore the iPhone was with a custom firmware (IPSW file), so I found one for 4.2.1 and it worked.


Only problem now is that the baseband is not the correct one for the 3G, so the GPS is not working correctly. Unfortunately I found out that the bootrom was 5.9 and that it was not possible to downgrade the baseband on this bootrom, so for now I'm stuck with it. For other people coming to this page, check out your bootrom, if you're on 5.8, there is a solution for you!


Moral of the story: if a price seems too good to be true, there's probably some trouble ahead!